Preparing your motorhome for winter storage

Even if you use your motorhome regularly over the winter it is still vital you prepare it properly for any period of storage where the temperature is likely to drop below freezing. Failure to do this can cause expensive damage to your motorhome!

The key message is to make sure any on-board water is removed. If this is allowed to freeze it can burst pipes, tanks, boilers etc. – which can cost a lot to rectify

Here are the basics of preparing your motohome for winter storage – it’s based on our Hymer B544 but the process will be similar whatever make & model you have.

Drain your fresh water tank completely, you may have an external tap/drain for this – if not you will need to reach inside the tank and pull out a plug from the bottom (it will usually be in the sump where the water pump sits)

Empty the water out of the boiler – a typical Truma style boiler holds about 12 litres of water and if this is allowed to freeze it can crack the metal vessel in the boiler, probably the most expensive potential failure as it can require replacement of the entire boiler!

Most systems are fitted with a ‘frost protection valve’ which is designed to open automatically when the temperature drops close to freezing, but it is a good idea to open this manually just in case it is not working for some reason.

Our valve is located near the boiler itself and looks like this:- 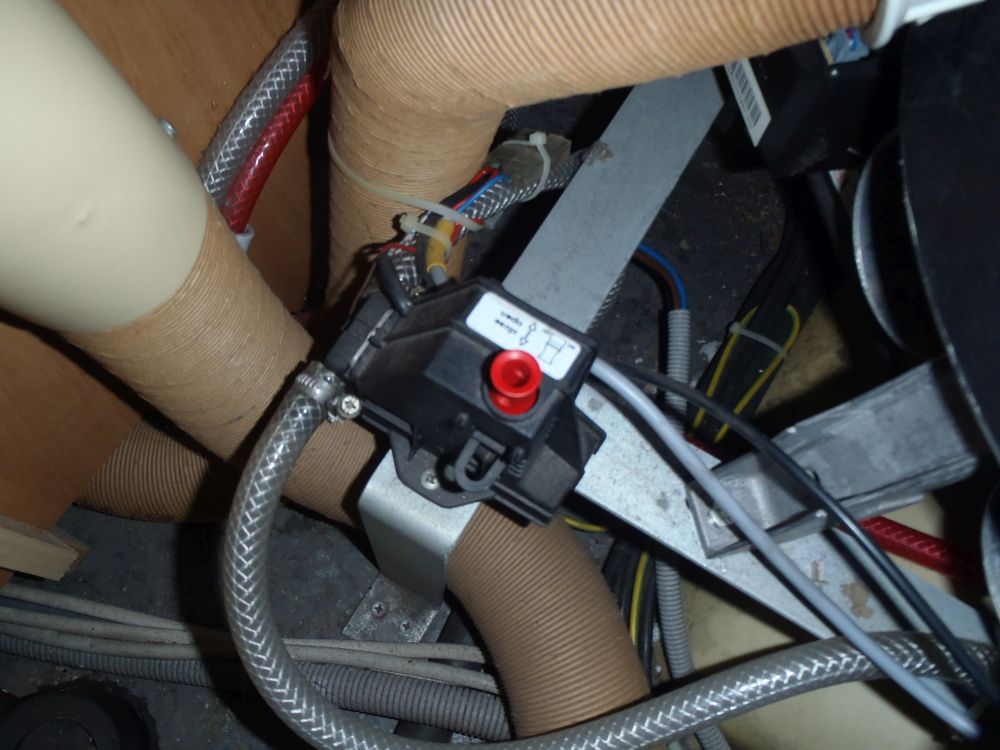 Push the red button on the top of the unit down and the boiler will drain out under the van. If you don’t have a frost protection valve there should be a manual valve/top located at the lowest point of the pipework near the boiler.

Water can sit in both the hot and cold pipes, so this has to be drained out also. There will normally be drain taps fitted in the lowest section of pipework, ours are under the sink and look like this (the white taps in line with the pipes):- 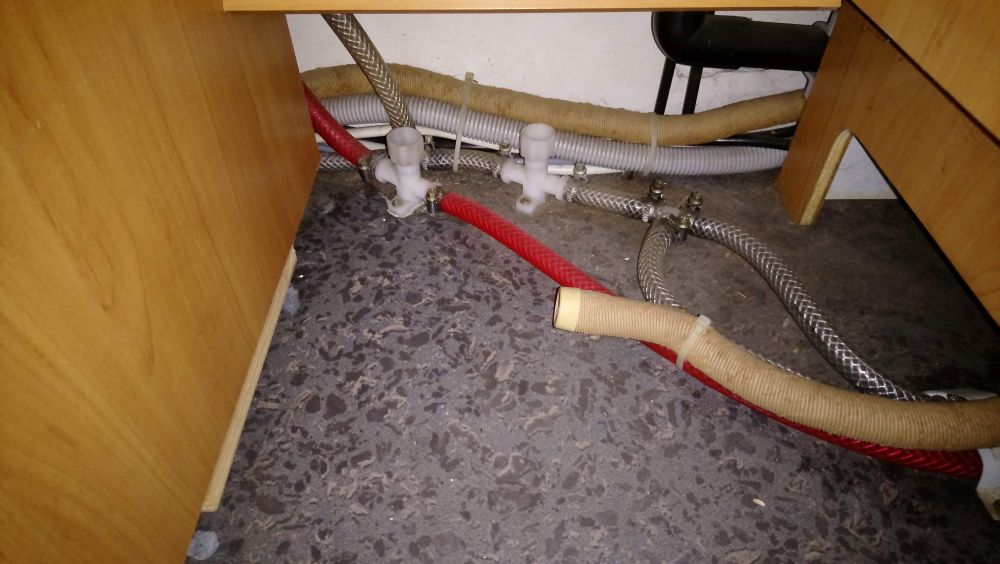 Simply turn the white knobs anticlockwise and any water left in the pipes will drain out under the van. When you do this it is important to open all the taps so that air can be drawn in to replace the water draining out, if you have mixer taps set them to half way between hot and cold.

If you have a shower head on a pull-out flexy hose hang it up a high as possible so water doesn’t sit in a u-bend in the hose, like this:- 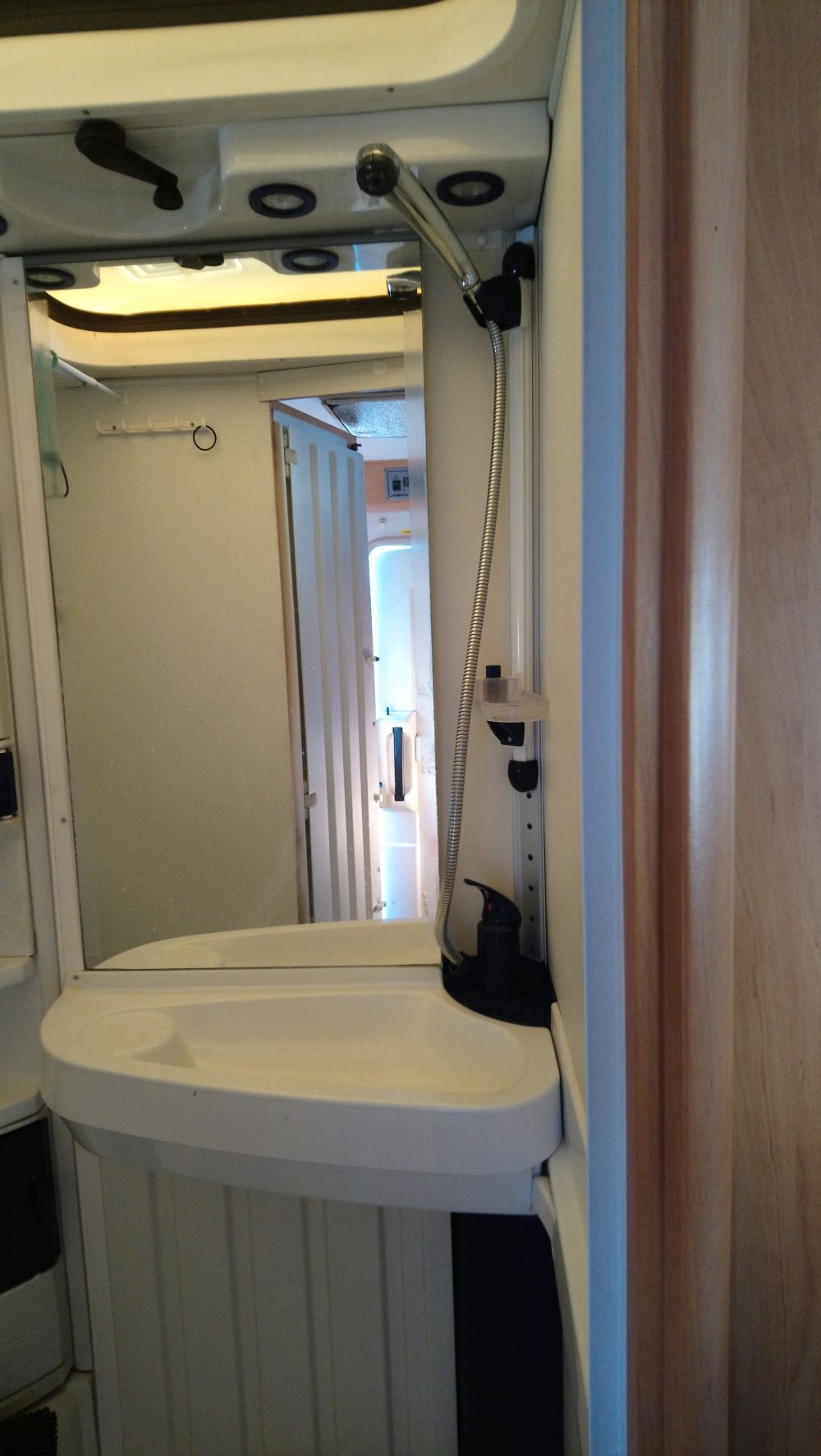 Some people also like to remove the water from the traps under the sinks, you can normally unscrew the traps off the bottom of the sinks to do this, but a bit of salt down the plug hole to lower the freezing point will normally suffice (and this also maintains the seal of the trap so you don’t get nasty smells coming up from your grey tank!)

Finally it’s worth checking you haven’t left any liquids in your food cupboards, as a burst bottle or jar could make a hell of a mess!

Hope this helps – if you have any questions or advice of your own please leave a comment below…….