How to – use the Mont Blanc Tunnel in a Motor Home

Crossing through the Mont Blanc Tunnel in a Motor home should be considered as an adventure in itself! 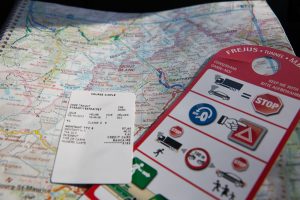 Crossing into Italy for the first time through the Mont Blanc tunnel was a thoroughly organised and efficient affair. The only uncomfortable feeling resulted from the jaw dropping cost! €57.60 for a camping car and that’s not even for a return ticket!

Rules a plenty we were provided with a handy list to hang on our rear view mirror just in case we missed the numerous  illuminated signs. In fairness the rules seemed quite sensible and made for a swift passage.

RULE 0 – abide by the speed limits..they will catch you and WILL fine you! Minimum 50kph and maximum 70kph with 100m between vehicles.

The tunnel itself is an engineering wonder. Completed over 8 years by a workforce numbering 350, 4.6 million man hours,  711 tonnes of explosives and 771,240 bolts reduce the route from France to Turin by 50 miles which is significant when you are only getting 23 miles to the gallon in Frau Hymen (our 1999 B544 Hymer Motor Home)

The whole experience humbled by the rather understated monument next to the French side of the tunnel commemorating those lives lost in the fire of 1999. The worlds press were quite damming at the time:

Take a look here for more information about a safe journey through the tunnel and latest news about costs and rules:

How To – Efficiently empty your toilet casette