Ducato based Motorhome – fixing judder when pulling away from standstill

A nasty judder through the vehicle when pulling away from a stop seems to be a common complaint with Ducato based Motorhomes – read on to understand why this happens and how to sort it…….

When you pull away from stationary you need to couple the engine’s crankshaft (which is rotating) to the drive wheels (which aren’t!) – when this isn’t achieved smoothly you get the characteristic jerky pull away/driveline judder.  There are two main components likely to cause this phenomenon – the clutch and the engine/gearbox mounts. In order to understand what is going on  it helps to have a basic understanding of what these components are, and what they do.

The simplest components are the engine/gearbox mounts, these are effectively just rubber blocks designed to mount the engine and gearbox to the chassis, while allowing some movement to limit transmission of vibrations into the vehicle structure. As they get old the rubber can degrade and may become detached from the rest of the mount completely – contamination with oil etc. can also accelerate the rate of decline.

When you go to pull away you are applying a torque to make the road wheels rotate, because of Newton’s third law (for every action there is an equal and opposite reaction) the engine and gearbox are trying to rotate in the opposite direction. As you can imagine this puts a lot of force on the engine & gearbox mounts, whose job it is to make sure the engine stays put and only the wheels rotate! If the mounts are worn this can cause the engine to shake, in turn causing vibration in the driveline and the annoying judder.

The x230 Ducato has three mounts, one at either side of the engine/gearbox assembly and one underneath at the rear of the gearbox, the side mounts like this:- 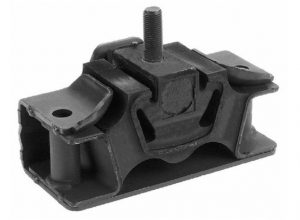 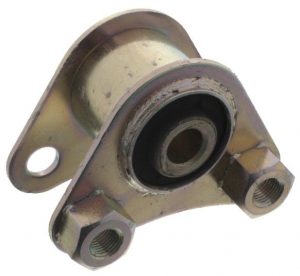 Here you can see the mounts as installed on the vehicle, left hand engine mount, looking in to the engine bay from the front (on the end of the engine, just underneath and to the right of the battery tray):- 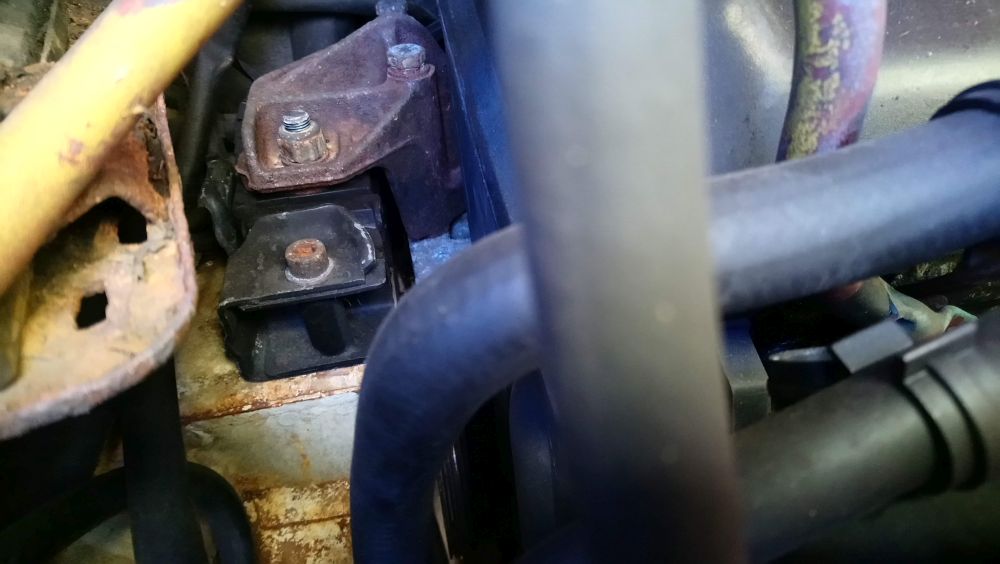 Right hand mount, above the end of the gearbox just underneath and behind the air filter housing:- 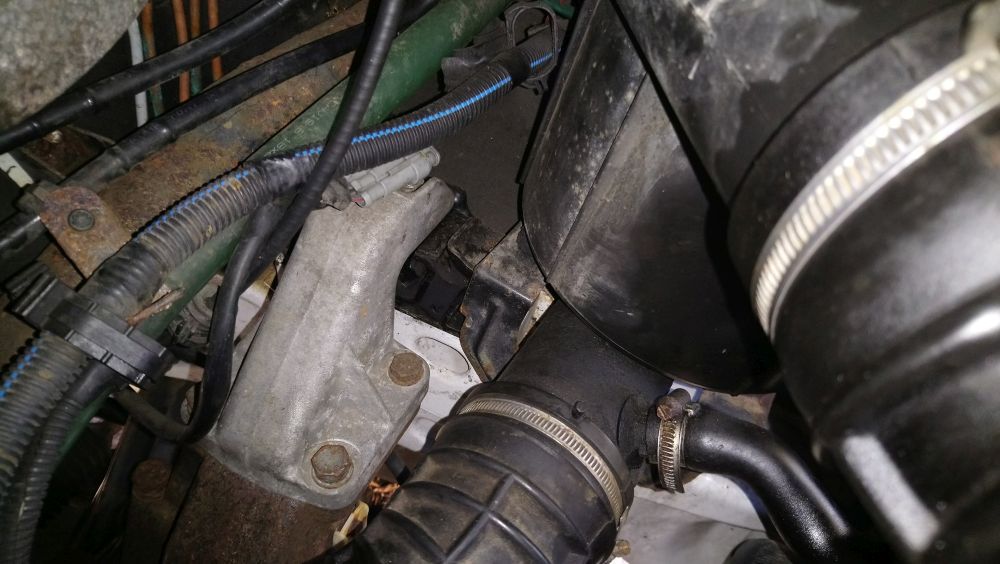 Rear mount as seen from underneath – on the back of the gearbox:- 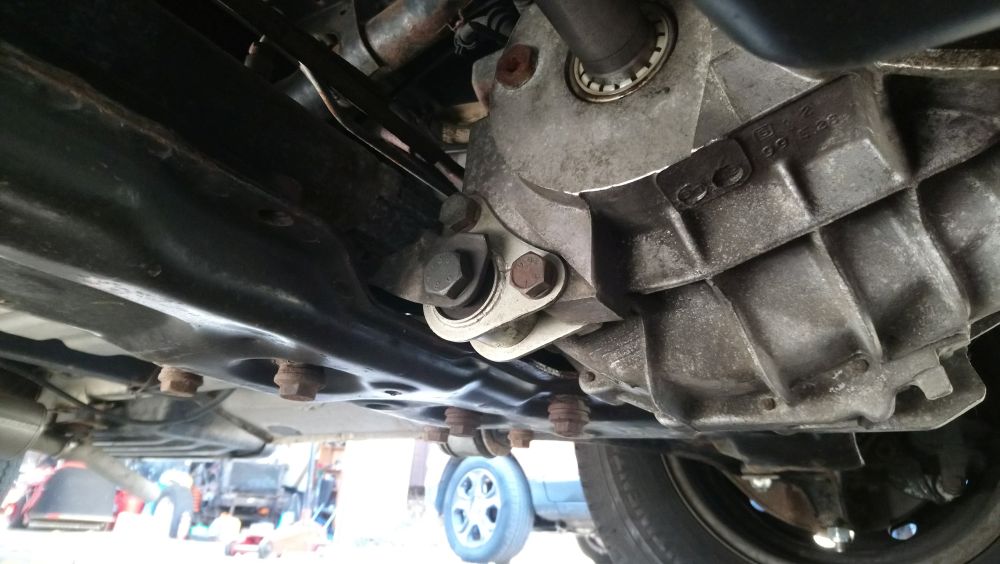 Note – there is another rubber mount element in the link that connects the rear engine mount to the subframe, this will be obvious when you unbolt it. This may also be worn and need replacing.

All these mounts are cheap and easy to replace so a good place to start when trying to track down a judder when pulling away. If they are very old it is a good idea to replace them anyway to help prevent future issues down the road. Remember that when you unbolt them the engine & gearbox will be unsupported so only do one at a time and support the engine when you have any removed – a trolley jack underneath the engine or gearbox (with a piece of wood or similar to protect the area you are supporting) works well for this. It may also be useful to have a helper nearby when fitting the new mounts as the assembly can move a little when unsupported, making it difficult to re-align the mounting holes. Having an assistant to push/pull on the engine while you slot the bolts in makes this much easier!

This diagram may help explain the working of the clutch:- 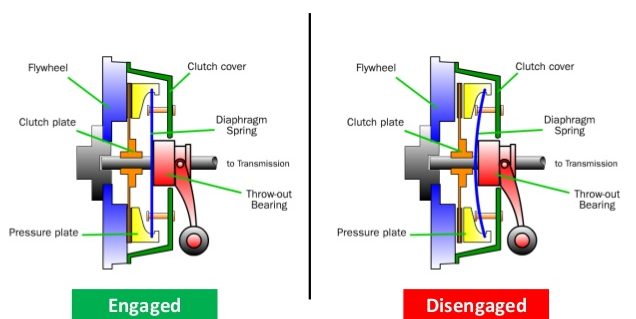 The clutch itself (normally a three-part kit of friction plate, clutch cover/pressure plate and throw-out bearing) is not too expensive, but there is a lot of labour involved so it can be expensive to have a clutch replaced at a garage. It is entirely possible to replace the clutch on your driveway at home (I did), but it is fairly involved as it requires removal of the entire gearbox, and manhandling the heavy gearbox can be tricky – especially if you are on your own!

To enable removal of the gearbox the clutch fork pivots on a pin/shaft that can be removed from the side of the gearbox – you will either need a special tool to pull it out of the gearbox or knock something up with metal tube/washers/bolts to do the same job (that’s what I did!) With the pivot pin removed the clutch fork can then be pulled out of the thrust bearing and removed from gearbox, allowing the gearbox to be removed normally. Re-fitting is the reverse – gearbox back on, fork back in then shaft pushed back though the fork. New release bearing come with a plastic collar on them that retains the circlip which fixes it to the diaphragm spring – this allows the bearing to snap into place by pulling on the clutch fork once everything is back together.

When the clutch is removed you will also be able to check for damage to the surface of the flywheel – if there are patches of glazing on the flywheel cleaning it up with a light abrasive can help smooth out clutch engagement, if it’s really bad it is a good idea to take the flywheel to an engineering shop for resurfacing.

Replacing the mounts and clutch completely sorted the judder on my 1999 Hymer B544 – hopefully it will be the same for you!